6 Awesome Gospel Lessons as Taught by "The Hobbit" 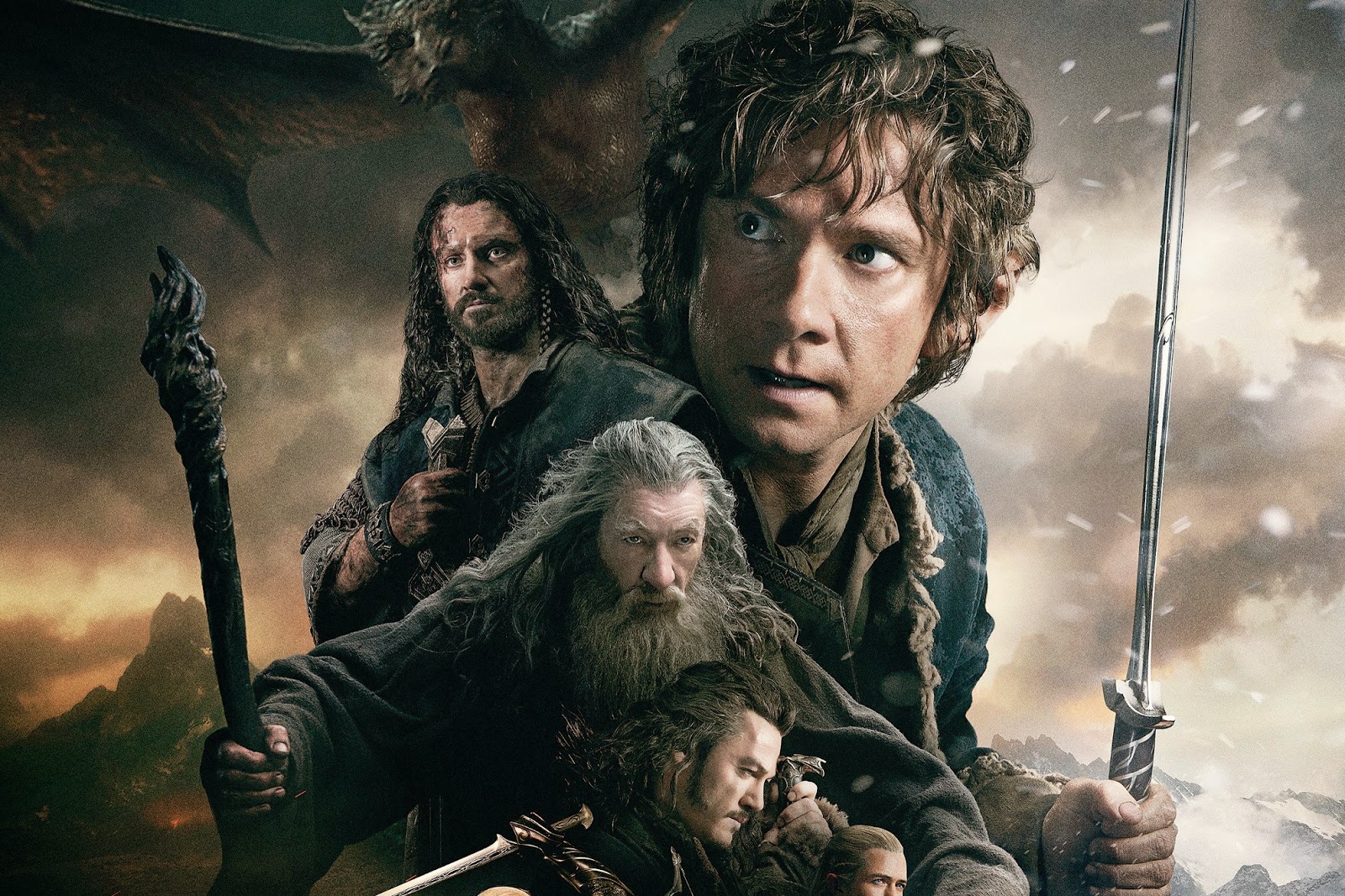 Two weeks from now will mark the end of a cinematic era. I've got my tickets and I might end up buying tissues. Just in case.

Having read The Hobbit, seen all of the Lord of the Rings films, and started on the Two Towers recently, it's kind of sad to see things come to an end. J.R.R. Tolkien's stories are not only magical, but they provide us with valuable insight on who we can become and how we can face life when it's hard. Not only that, but they teach a thing or two that reaffirm (to me) the importance of faith, reliance on God, and hope.

So, in honor of the sixth and final Tolkien-based film (may it be AWESOME), here are six gospel lessons we can all learn from The Hobbit films: From the beginning, it's easy to cheer for Bilbo. He's the underdog, the guy that no one has faith in and that everyone judges for his size and lack of experience. Bilbo does not have the battle history of the dwarves, nor their wealth. He comes from a corner of Middle-earth that few know exist. In reality, he's the last individual anybody would pick to face a dragon head on, and both he and the dwarves know it. But Gandalf chooses him anyway. The rest of the world considers Bilbo to be a "halfling," short of stature and free of renown, but to Gandalf, Bilbo is of infinite worth and potential, and ultimately, Bilbo proves that by repeatedly doing courageous deeds.

The Lord looks at us in the same way. We may be small or unfit or awkward or misunderstood, but we are called to do great things. The Lord knows our hearts and our intents when no one else can, and because He does, He trusts us. We are each a great part of His plan and a hero(ine) of our own kind. That's what the Lord sees when He looks upon us. 2. The Lord's will is not always our will.

If Bilbo had his way, he would have kept sitting on his bench, smoking his pipe, and looking forward to a long life of doilies, second breakfasts, tea, and quiet. Imagine his bewilderment when his home was suddenly filled with dwarves and a wizard who spoke of lands beyond his scope! Not only did they speak of it, but they were there to take him along with them. His entire world was interrupted without his permission, and he resisted, at first. Even with Gandalf's praise and faith in him, Bilbo was not cool with trekking across Middle-earth to help some dwarves reclaim their mountain.

Ultimately, what may have motivated him was the realization that maybe, just maybe, he was designed for something greater.

That's real life for us, too, folks. If the natural man had his or her way, we would do what was easy, what demanded no sacrifice from us. We, like Bilbo, might shirk from trials and callings, feeling unprepared and unworthy.

But the Lord's vision and His plan for us is so much greater than our own. We are often asked to leave our Gardens of Eden, our "Shires," to go to places we've never been, do things we've never done, and suffer trials we cannot see. And at the end of these journeys, we will not be the same person we were. But that is the point. We will be better than we were.

3. Never leave the path, and if you do, seek the light.

"Be good, take care of yourselves--AND DON'T LEAVE THE PATH," Gandalf says before leaving the company to face Mirkwood on their own. It's advice that, if heeded, would have spared a lot of trouble. But it wasn't.

The path was narrow, visibility was limited, and moving forward was a sheer act of faith, but the path was relatively safe, free of deceptive elf magic, enormous spiders, and evils left behind by Sauron's reign. The minute the dwarves and Bilbo stepped off of the path, they made themselves vulnerable to darkness.

I can't help but think of the vision of the Tree of Life when discussing Hobbit-esque paths. Overwhelmed by mists of darkness, those who commenced on the path to the Tree of Life "did lose their way, that they wandered off and were lost" (1 Nephi 8:23). Those who willingly chose to leave the path and pursue evil began "wandering in strange roads" (1 Nephi 8:32).

For awhile, the dwarves were overwhelmed and lost, wandering, and it took Bilbo climbing up a tree and seeking the sun to get some kind of direction. If we leave spiritual paths and wander into darkness, our hope is the same: climbing out of it, however hard that may be, seeking light, and finding direction from good sources. Not all who wander are lost, Tolkien writes. I'd add "lost for good." If we do find ourselves off the right paths, we can return.

The danger comes when, like Gollum, we choose strange paths and pursue darkness, leading us to the depths of our own Misty Mountains (mists of darkness) where we are susceptible and more receptive to regression and wickedness.

One of the most important statements in The Hobbit is made by Gandalf when he remarks that true courage is knowing when to spare a life. When that line haunts Bilbo at the cusp of slaying Gollum, everybody collectively goes, "Why? Why would you spare Gollum, someone so disgusting and evil? Nobody would even miss him if he were gone. Half of your trouble would disappear overnight. Why spare him?"

It's because life, even the seemingly most insignificant, is precious. Not things, not rings, but people. Life. Existence. The chance to go on and to change. Gollum, in spite of all of the horrible things he did, later helped Frodo and Sam. He would never reclaim the good inside of himself, unfortunately, but the fact that he was given a chance is significant.

Our lives are valuable things, and we need to treat them that way. Not only that, but we need to give of our love and charity and chances more freely. It is in the giving, not the taking, that we find true meaning in a life.

5. Satan is subtle and crafty.

Last night, I took a Revelations class and we talked about how Satan, and in this case, Satan's servants, are represented by a dragon in the scriptures. Not just any dragon, mind you, but a "scarlet colored beast" (Revelations 17:3). Boom. Enter Smaug, the Great and Terrible, who is also red.

Just like Satan, Smaug is this great, sleeping mass that people underestimate. In spite of the fact that he tore a whole city apart years ago, Laketown folk don't really think he's still around. They can't see him, and because they can't, they assume he doesn't exist. The reality is that Smaug hides and he waits. Smaug, in the book, is extremely cunning and witty and arrogant. You almost feel compelled to like him, because he's so good at what he does.

The key thing to remember is that Smaug does not wake up on his own. It is the heroics of Bilbo and the greed of Thorin that wake him up. The heroics he attacks from all angles, the greed he takes advantage of.

Satan is the disembodied Sauron, seeking to enslave Middle-earth. He is the deceptive Necromancer and the brutal Azog. But he is also the dragon, the cunning and stealthy one. Whether we do good deeds or bad deeds, we will wake him up, but only one of those actions will spare us from his "desolation."

6. After all we can do, Christ carries us.

It seems to be a widespread peeve that the eagles in The Hobbit, the only creatures who seem to win battles unscathed, only show up at the very last minute. "Stupid eagles," some people say. "Why couldn't they have shown up earlier and just flown the whole Fellowship or company all the way?"

I understand the reason why that would be confusing, but to me, the eagles and their timing play an integral part of the entire series. They are not meant to fight the battles. They are meant to win them. The eagles, in a very symbolic sense, are saviors. They are in the Bible, too:


Exodus 19:4
"Ye have seen what I did unto the Egyptians and how I bare you on eagles' wings, and brought you unto myself."

Deuteronomy 32:11
"As an eagle stirreth up her nest, fluttereth over her young, spreadeth abroad her wings, taketh them, beareth them on her wings."


"But they that wait upon the Lord shall renew their strength; they shall mount up with wings as eagles..."

When the battle is at its height, when hope seems lost, when we have done all that we can, our Savior is there. That's not to say that he isn't always there, but I think he lets us fight the battles he knows we can fight on our own. He isn't physically present, but his Atonement always is. Our mission is to endure. His is to bless and strengthen.

The Lord gives us servants that can help us and guide us. And they, too, aren't always physically present, but they commune with the Lord. They can see our needs and speak for Him. Our responsibility is to move forward, have faith, and endure to the end.


We are all hobbits, in a sense. Life is an unexpected journey and the Lord trusts us little folk to do amazing things. The great thing is that we can do them. We just have to have faith.